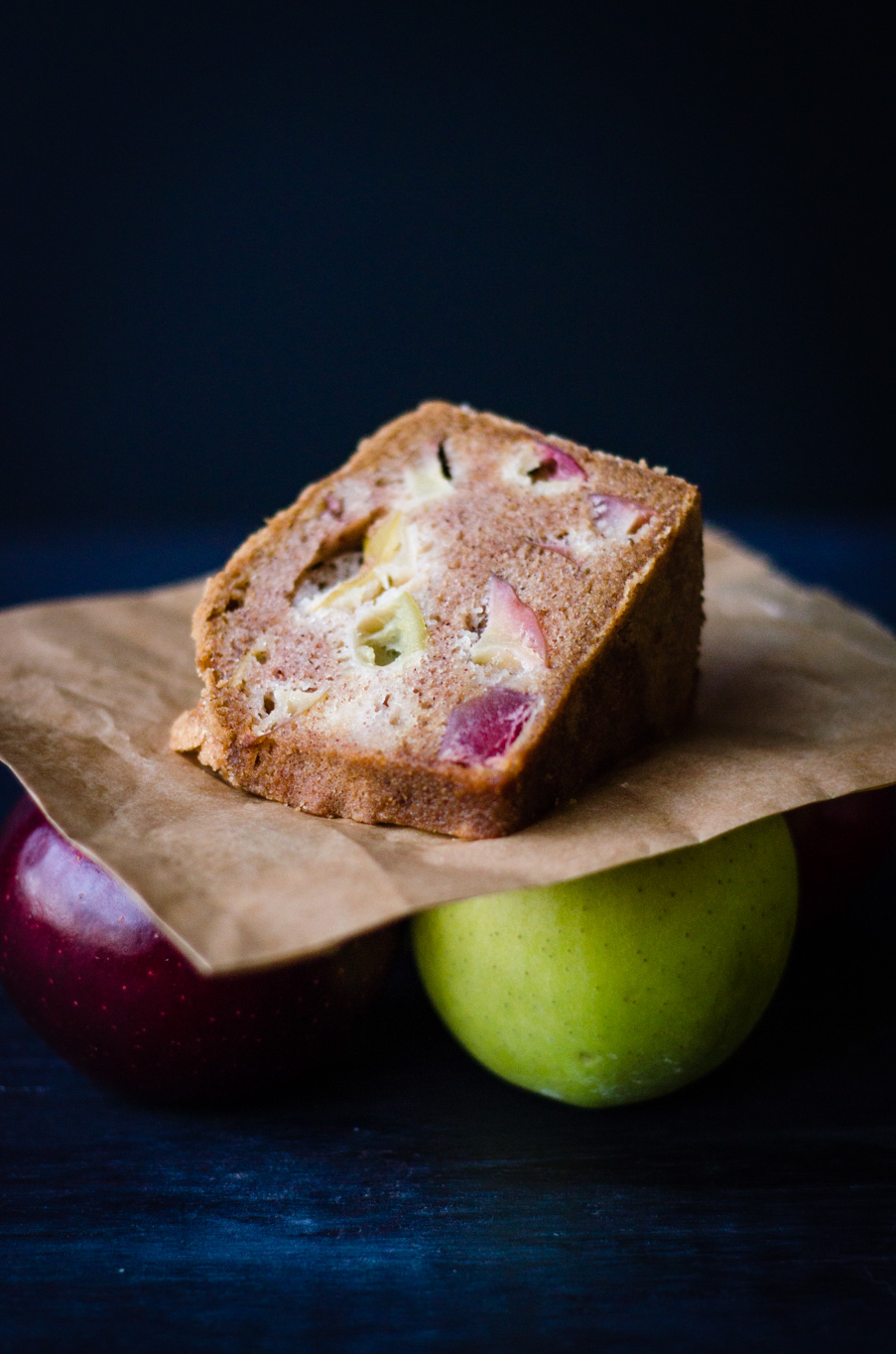 I’ve said it before, but fall is my absolute favorite time of year – the cool weather, the fall colors and who could forget all of the amazing food? It has been an incredibly gorgeous fall in PA too. The temperatures have been mild and the leaves have lasted forever. 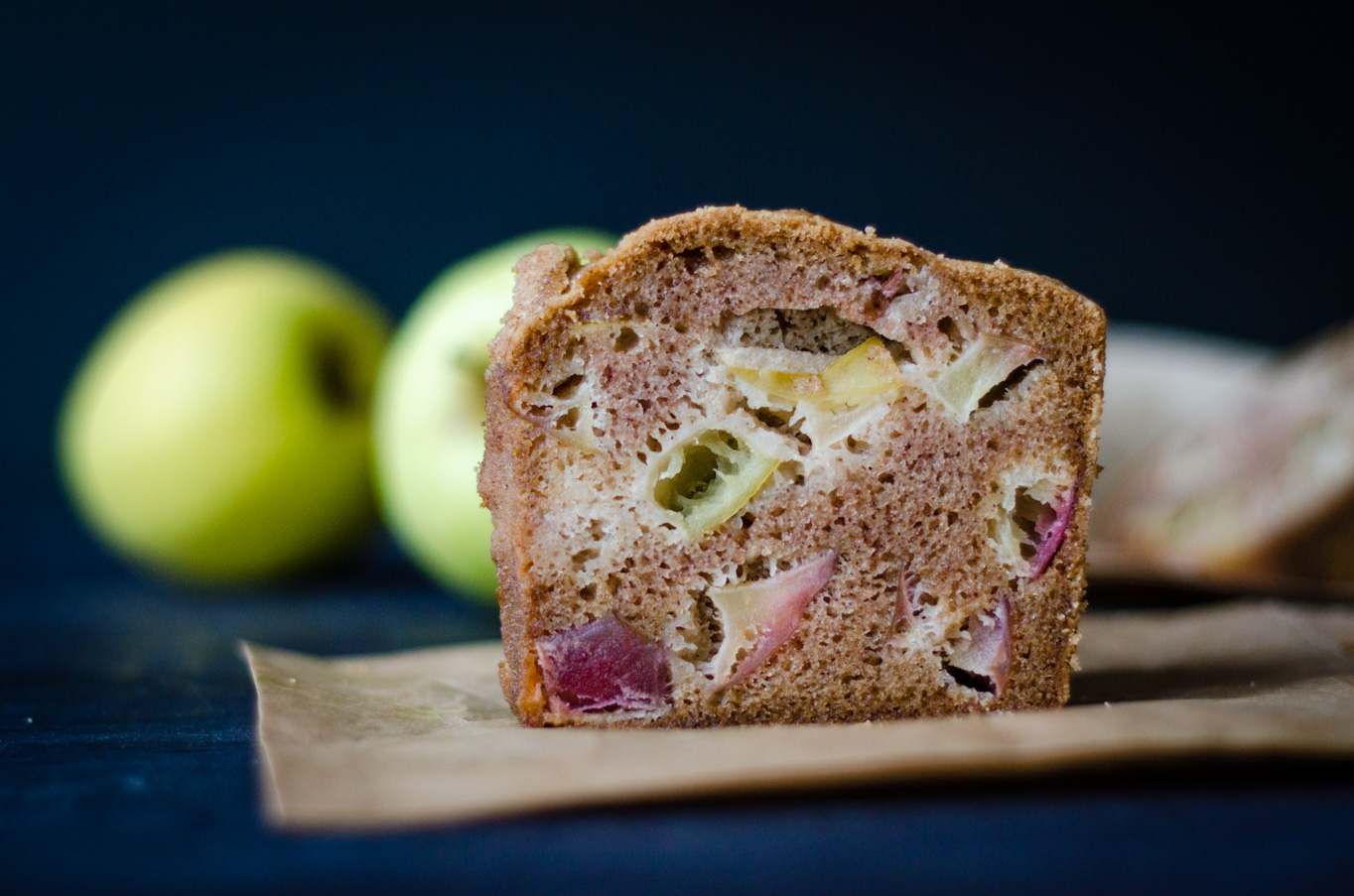 As usual, Aida has been ridiculously spoiled with multiple trips to the park every weekend. She’s developed a recent squirrel obsession which was super adorable at first, but is starting to become slightly problematic. I’ve been dragged through the woods on more than one occasion, hot coffee in hand, hoping not to fall on my face. So far so good. 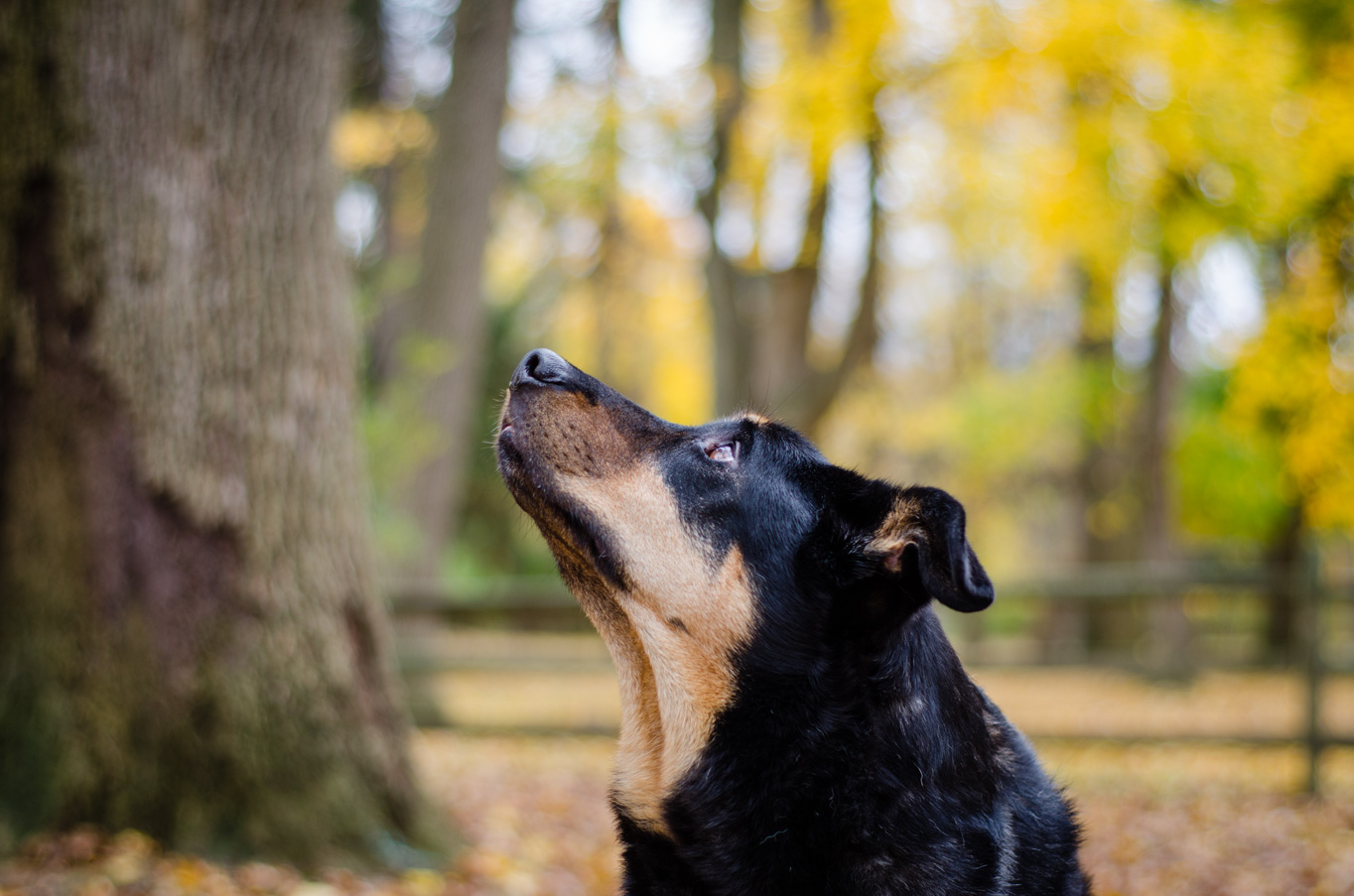 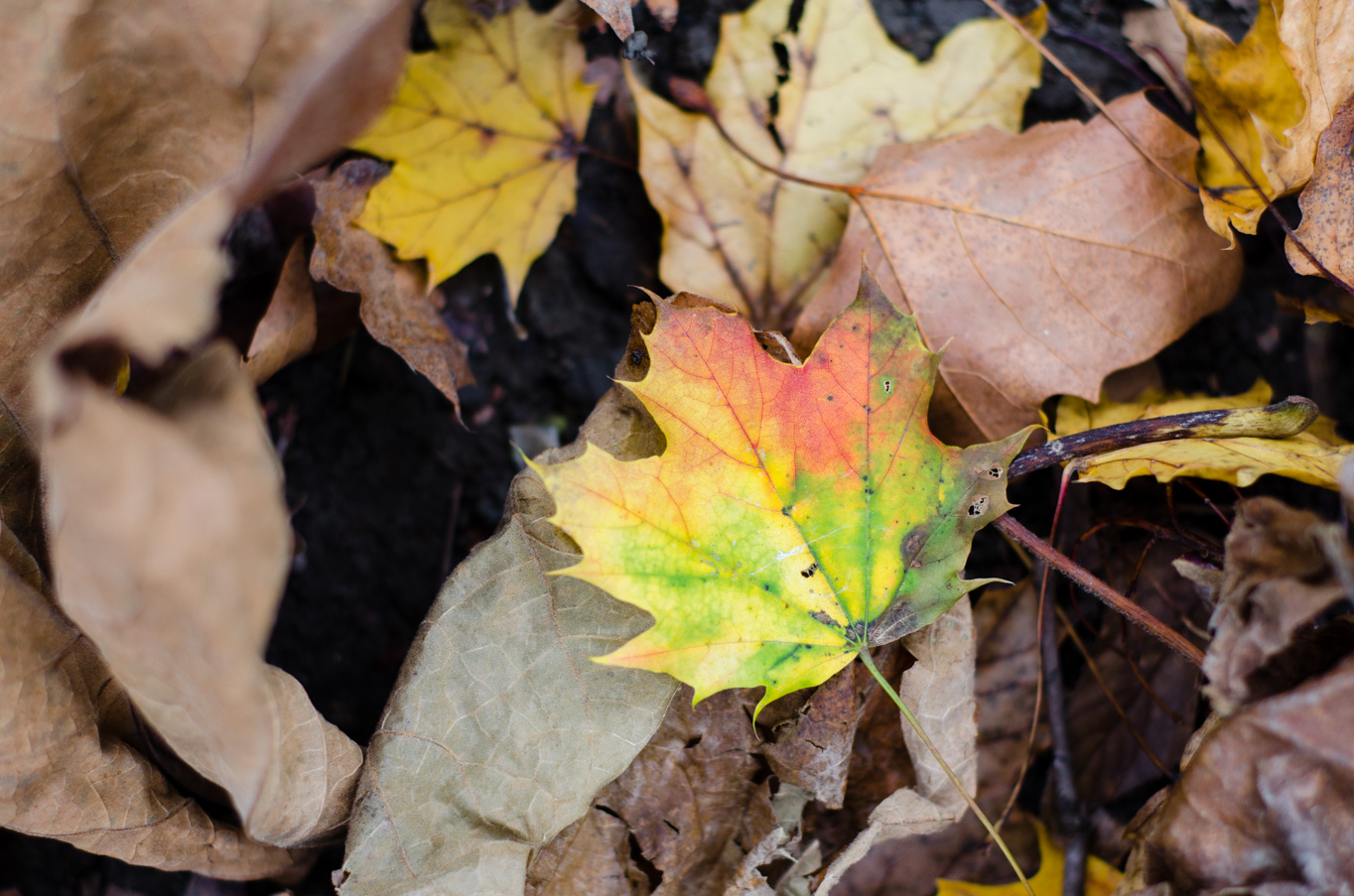 My mom and sister have been raving about Teddie’s Apple Cake for years. I’ve had slices of my moms before, but I finally got around to making it myself a few weeks ago. 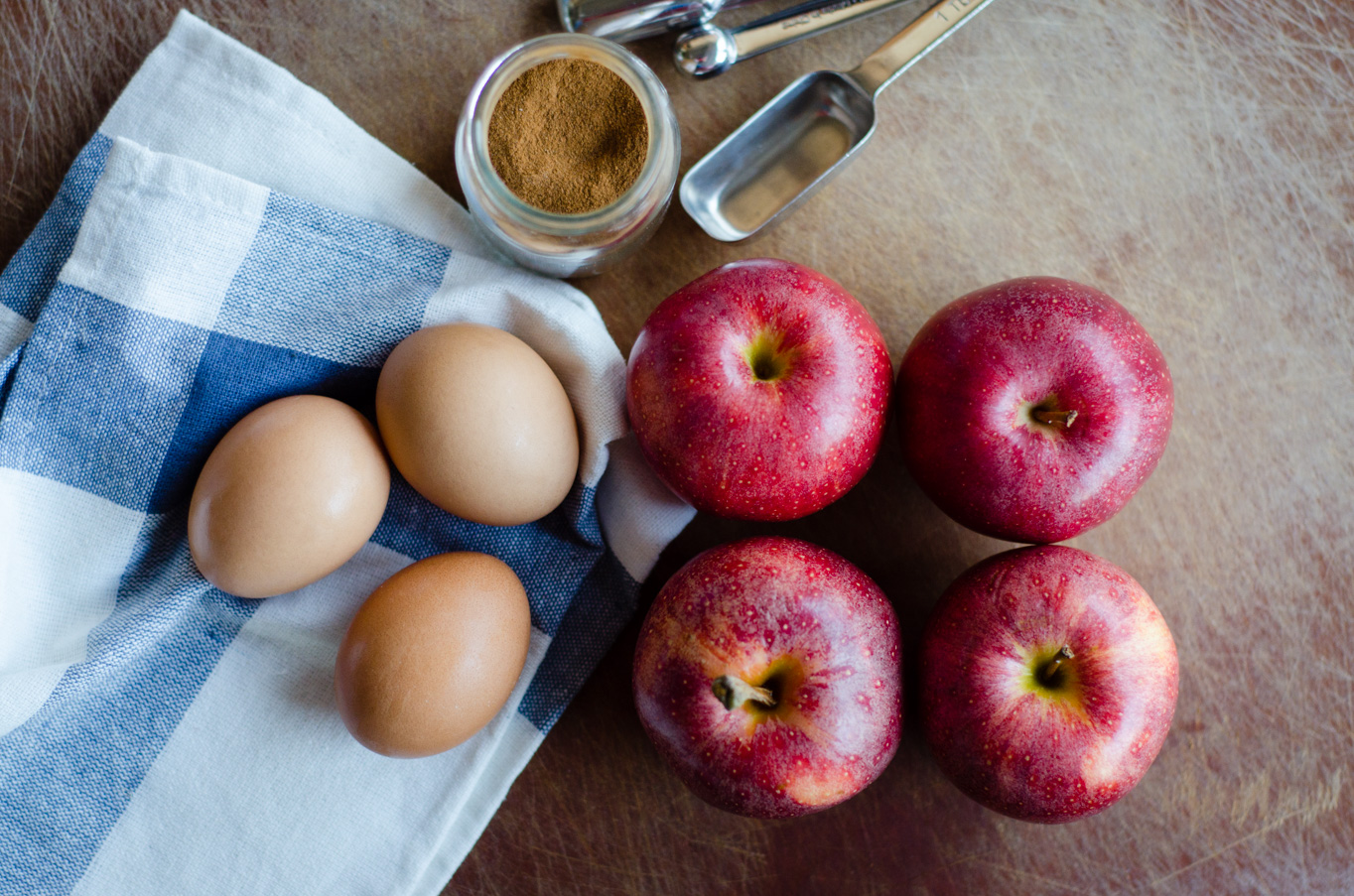 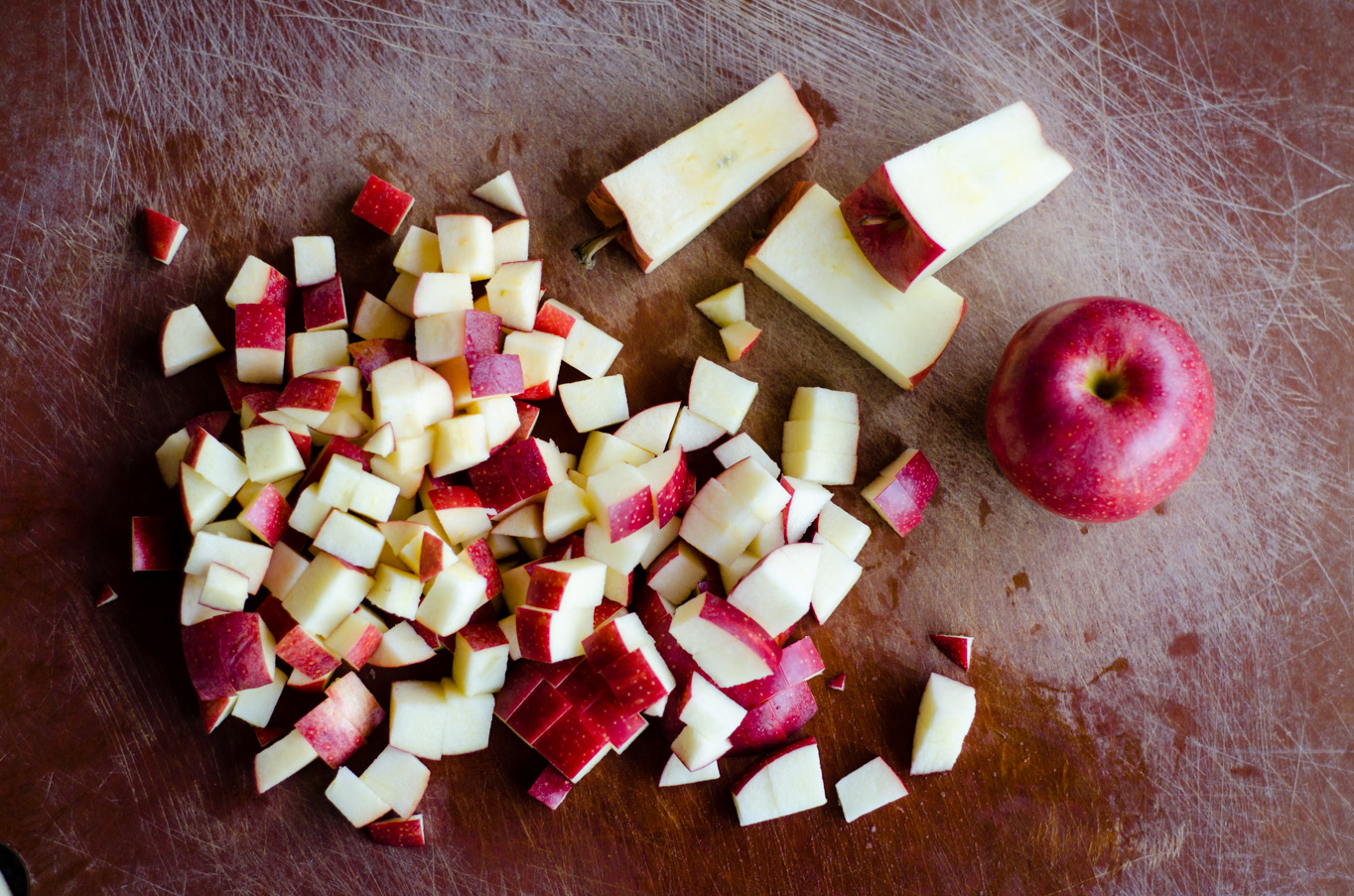 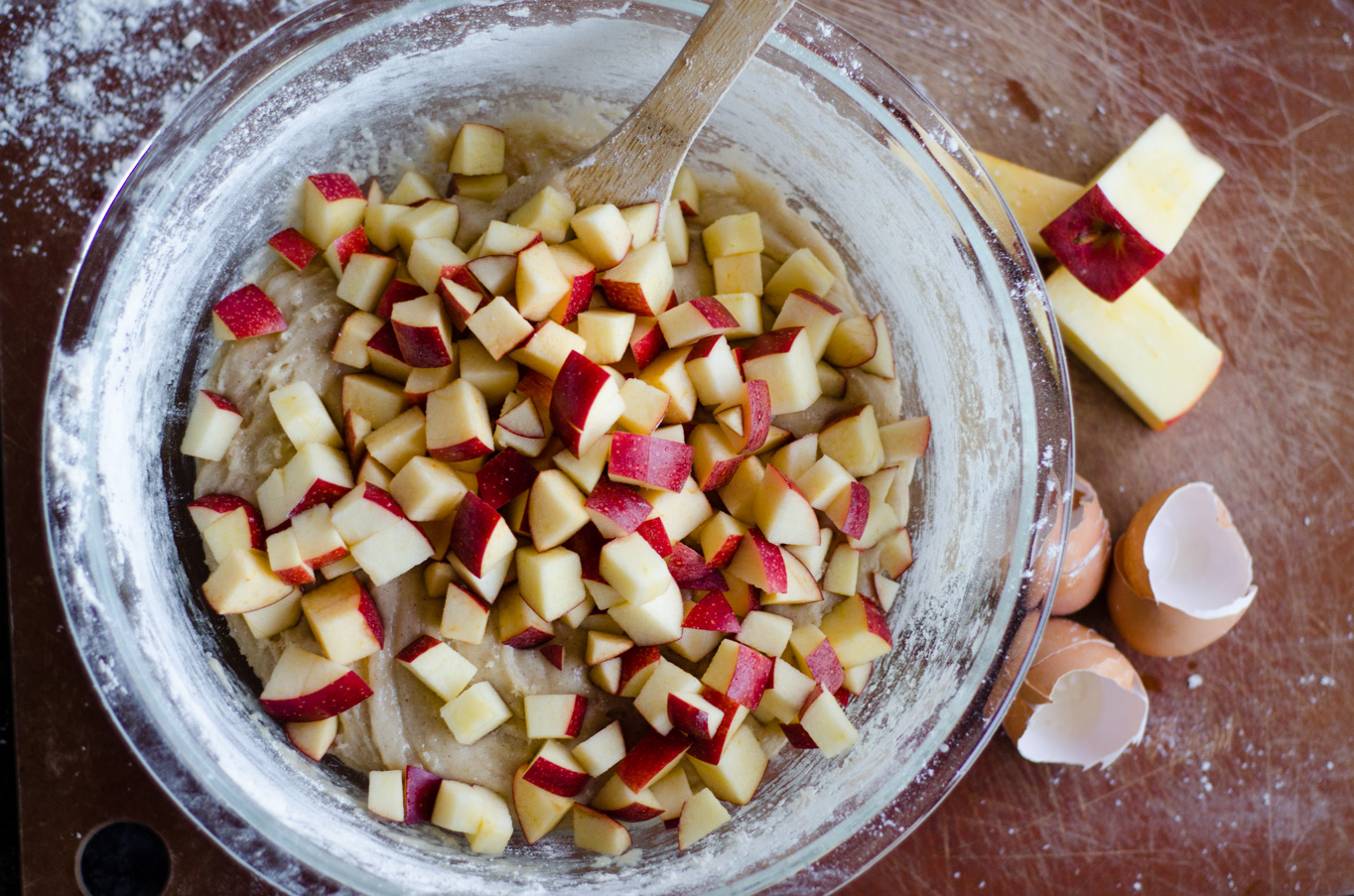 The first time I made the cake, I made it as written and it was good, but there were a few things that bothered me. I thought it could use a bit more apples, a little less oil and an extra bump of cinnamon. I was also getting a little off taste from the baking soda, and Mike the super taster agreed. 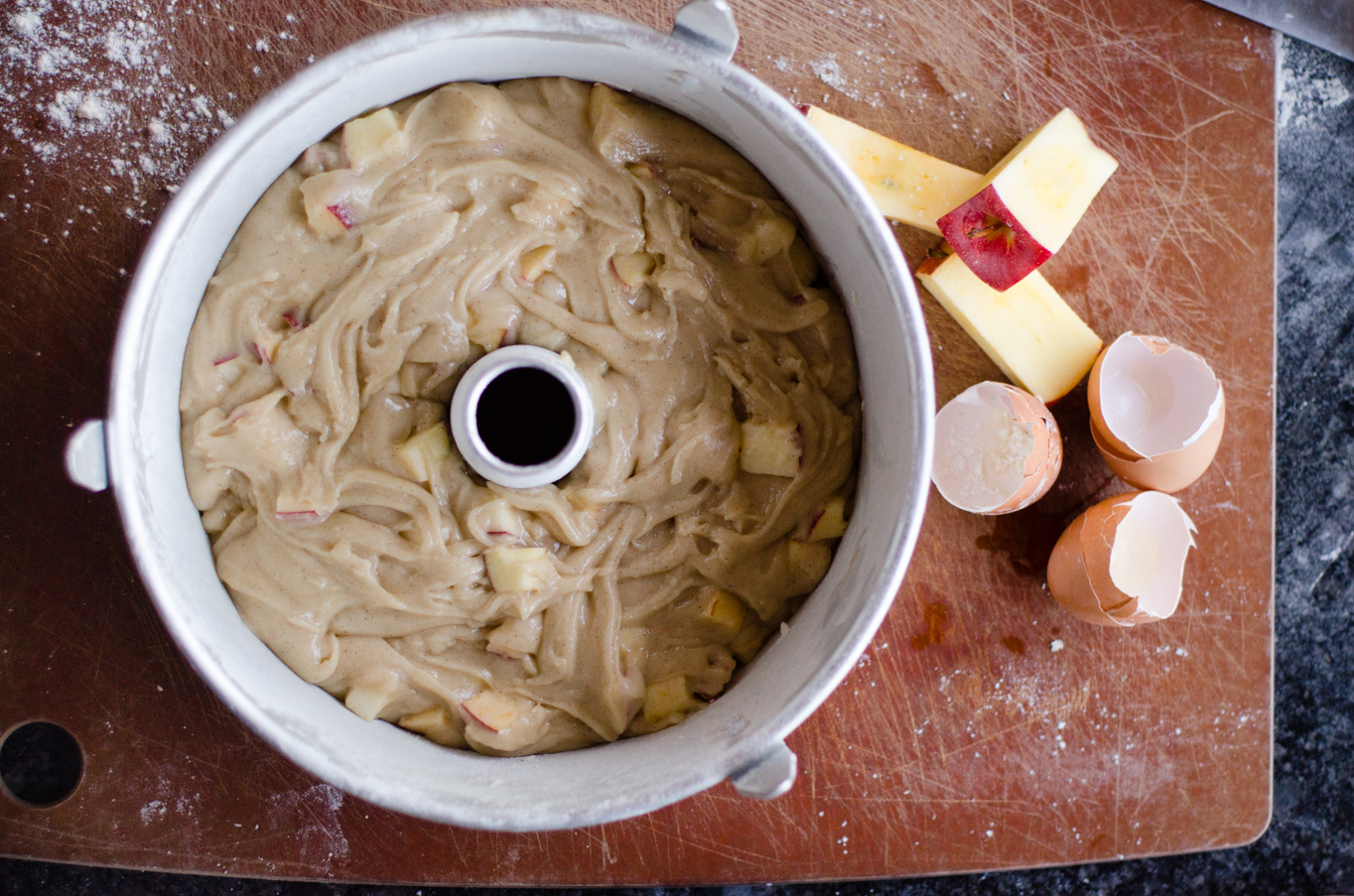 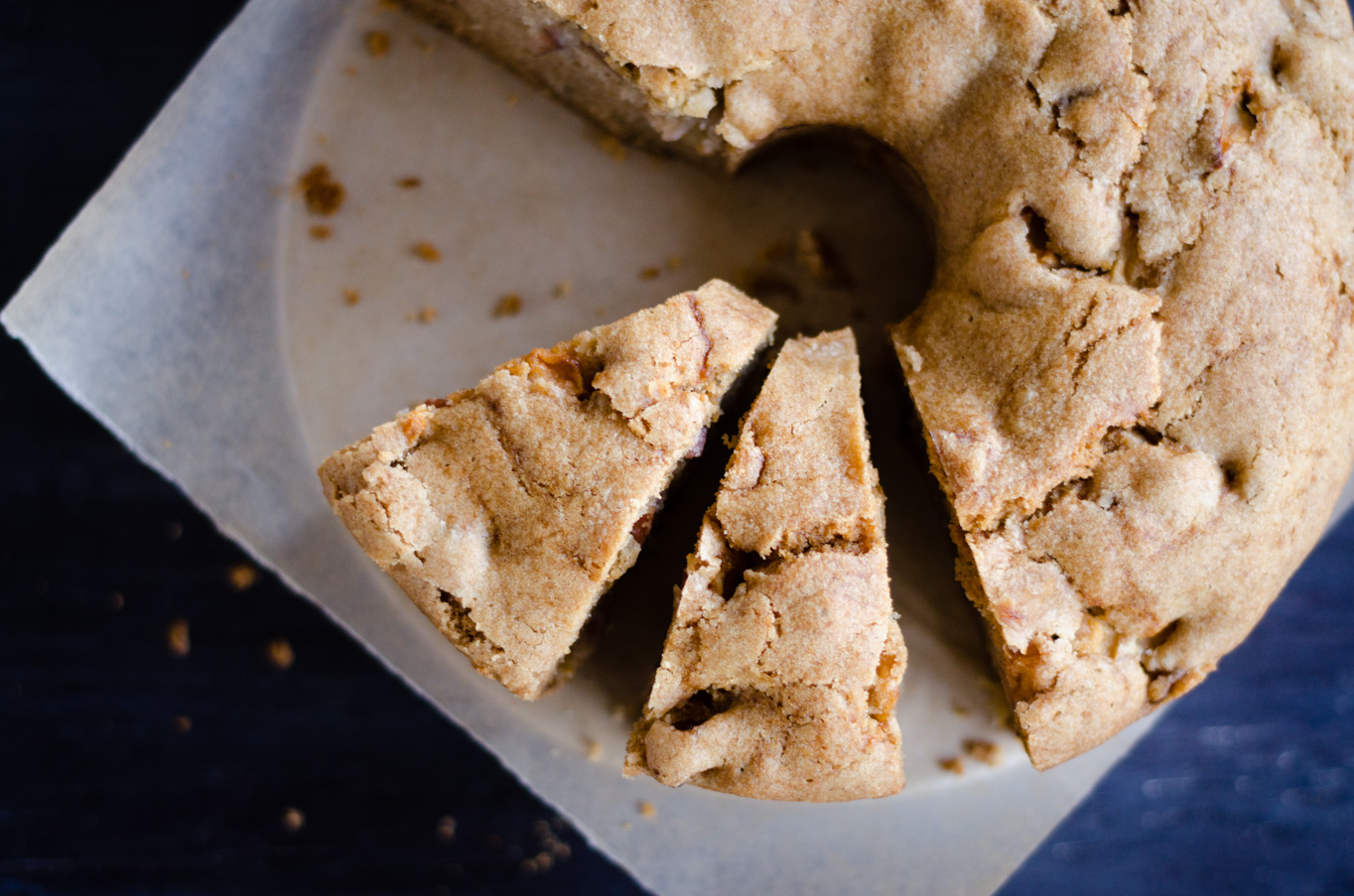 A few tweaks later and I think this is a pretty killer cake. It’s delicious and actually gets better as it sits. 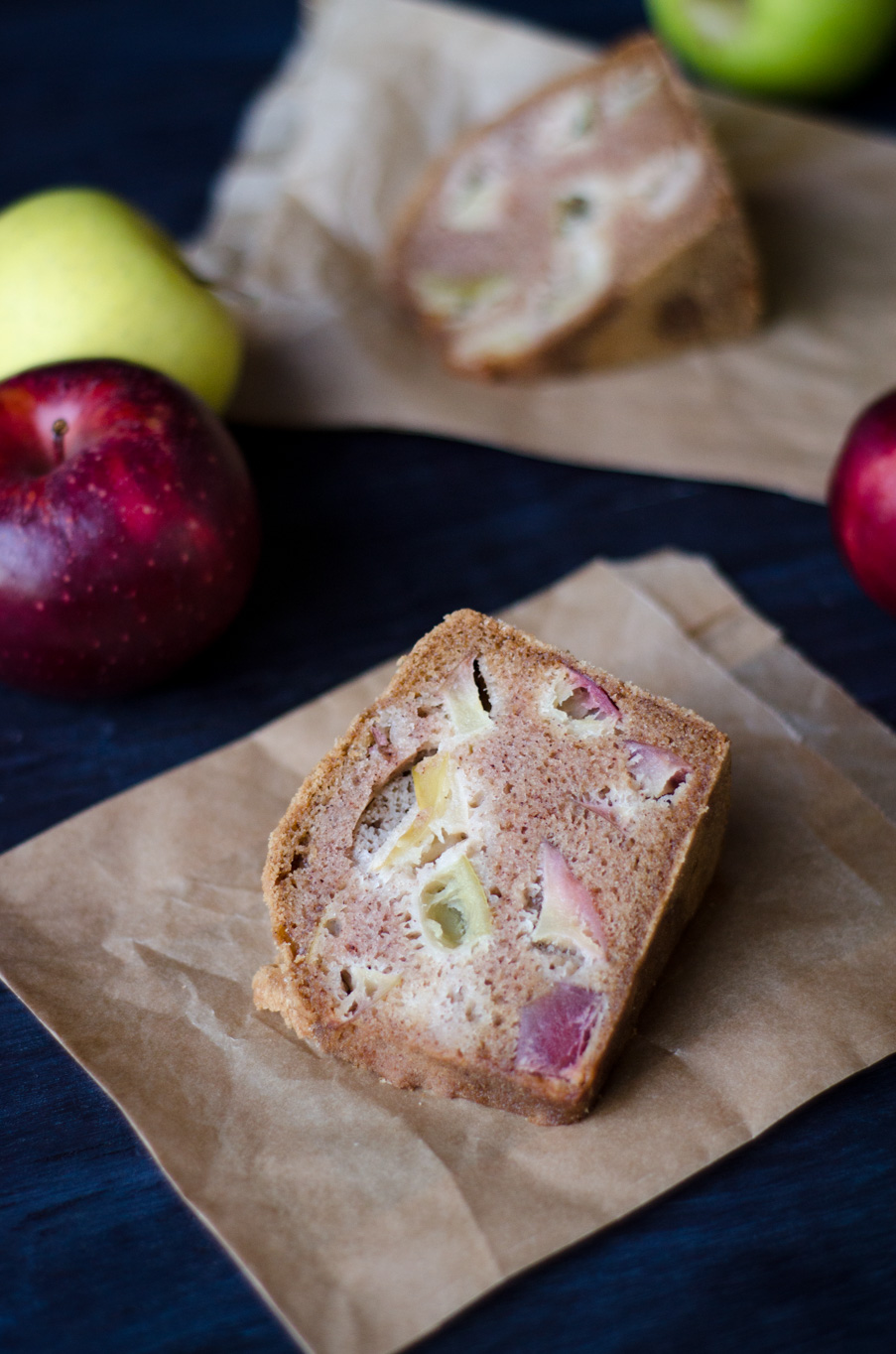 Adapted from Alexandra’s Kitchen and Epicurious
Serves 10 to 12
The original recipe calls for a cup of walnuts and a cup of raisins; however pecans and dried cranberries would be good too. I prefer this cake with just apples because it reminds me of a quick version of my mom’s German Apple Cake.
Any tart, firm apple will work. I’ve used Granny Smith, Winesap, Twenty Ounce, and Gala and all are excellent.
Butter and sugar for greasing pan
1/2 cup vegetable oil
1/2 cup (1 stick) of unsalted butter, melted and cooled slightly
2 cups sugar
4 eggs
1 teaspoon vanilla
2 teaspoons lemon juice (optional)
3 cups flour
1 1/2 teaspoons cinnamon
1 teaspoon baking soda
1 teaspoon salt
4 cups tart apples, cored and cut into a 3/4 to 1-inch dice
1 cup of walnuts or pecans (optional)
1 cup of raisins or cranberries (optional)

Beat the oil, butter and sugar together in a mixer (fitted with a paddle attachment). After about 5 minutes, add the eggs and beat until the mixture is creamy. Add vanilla and lemon juice (if using)

Transfer the mixture to the prepared pan. Bake for 1 hour and 15 minutes, or until a toothpick inserted in the center comes out clean. Cool in the pan before turning out.

This cake is wonderful with coffee or tea, but can be dressed up with vanilla ice cream or a dusting of powdered sugar for dessert.  It stays quite well, and actually gets better the day after baking. I’ve also frozen individual slices to thaw for a quick breakfast or emergency dessert craving.