Mike has been working in New Hampshire the past few weeks, so I drove up to visit him for our one year wedding anniversary last weekend.  While I was there, we had the most delicious ice cream sandwich at a little restaurant right off of Little Squam Lake, and I was determined to recreate it at home.  The cookies, and the ice cream are quite fantastic on their own, but are over the top delicious when combined.  For the cookies, I turned to one of my favorite sources, Cooks Illustrated. 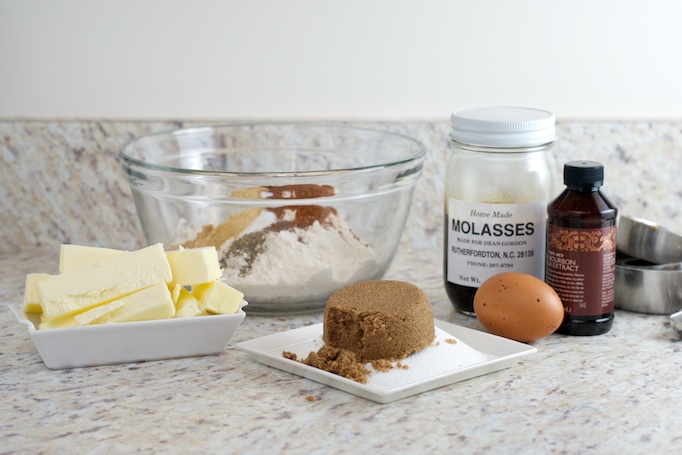 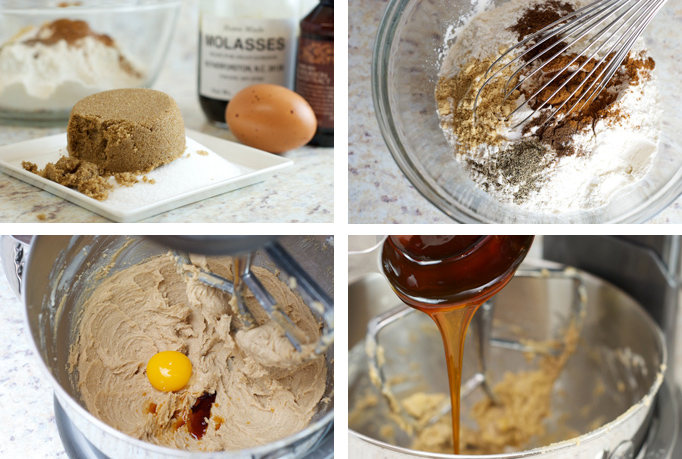 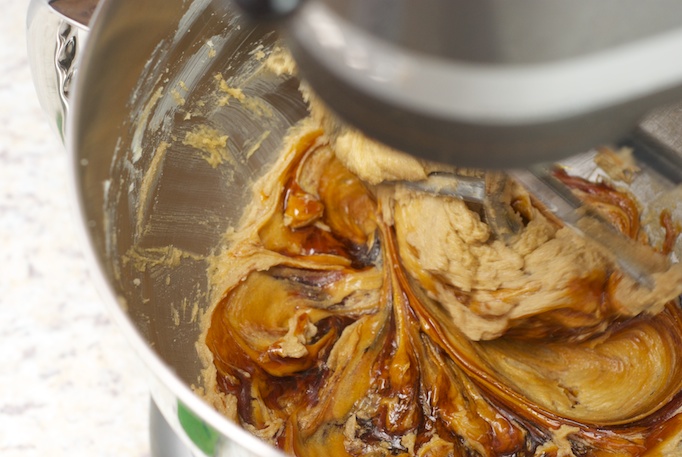 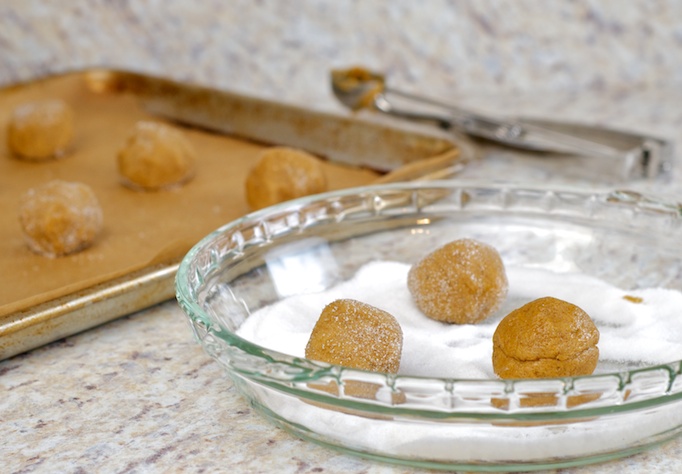 And for the Ginger Ice Cream, I modified Jeni Britton Bauer’s Vanilla Bean ice cream recipe.  This ice-cream, has a few unusual ingredients, which I have to admit, I was slightly skeptical about.  But being a Columbus, Ohio resident for a little over four years, I was able to taste Jeni’s delicious ice cream first hand, and I figured her recipes would hold up to the same high standards she puts on her local ice cream business.  And it really did; it is the best textured ice-cream I have made at home, and has a lot longer shelf life as well.  I have found with other ice cream recipes that the ice cream becomes very crystallized or grainy after a short amount of time in the freezer; this did not.  And it tasted good too.  I am eagerly awaiting my copy of Jeni’s new book – it should be here any day now, and I’m sure there will be a ton of recipes I want to try. 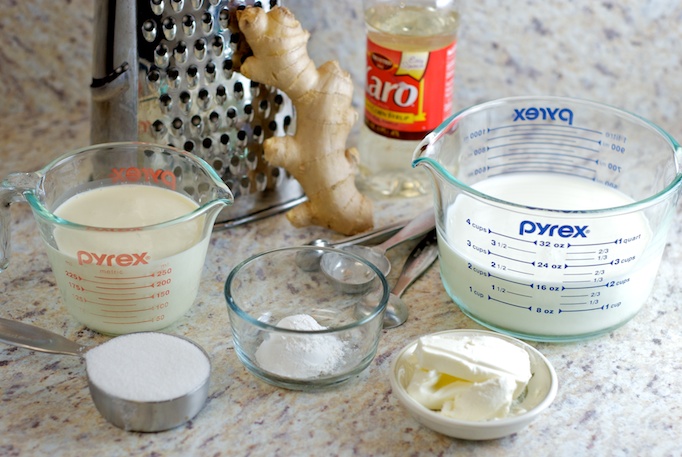 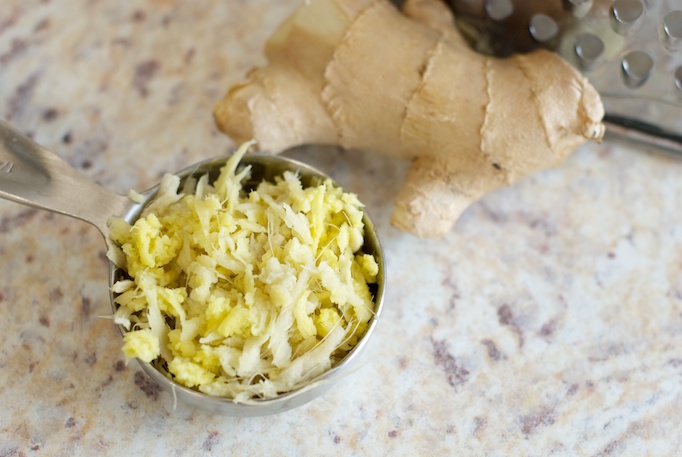 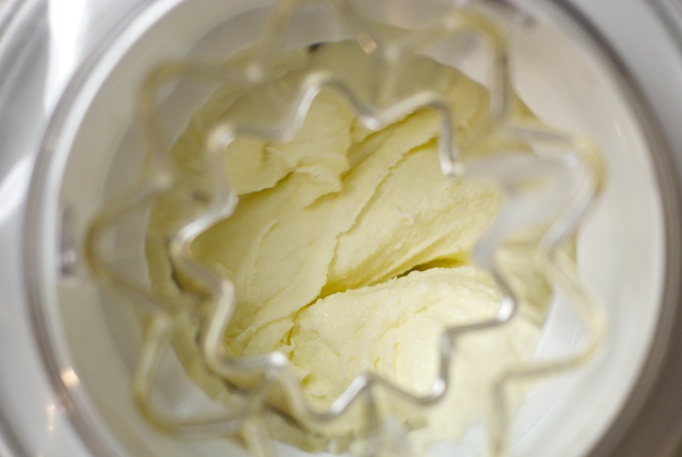 Molasses Spice Cookies combined with the Ginger Ice Cream for one awesome ice cream sandwich…I would suggest not making them all in advance, as I did for the photos.  Rather, I would make them as you want to eat them, so the cookie stay nice and soft. 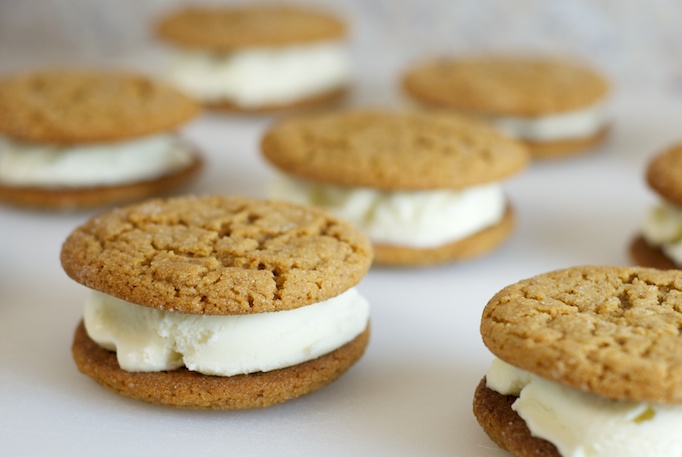 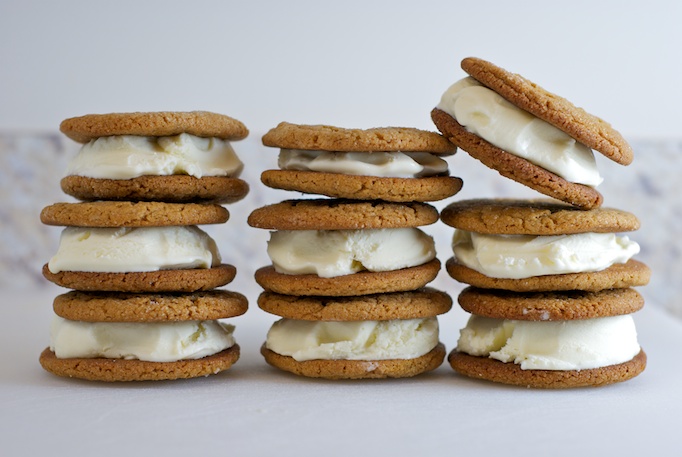 Heat oven to 375 degrees. Line baking sheet(s) with parchment paper.  I usually use one baking sheet and one sheet of parchment, and re-use the parchment for the entire batch of cookies.

In standing mixer cream sugars at medium-high speed until light and fluffy, scraping down once or twice as needed; about 3 minutes. Reduce speed to medium-low and add yolk and vanilla; increase speed to medium and beat till fully combine, about 20 seconds. Reduce speed to medium-low and add molasses; beat until fully incorporated, about 20 seconds, scraping bottom and sides of bowl once with rubber spatula. Reduce speed to lowest setting; add flour mixture and beat until just combined, about 30 seconds, scraping bowl down once. Give dough final stir with rubber spatula to ensure all flour has been mixed in.  The dough will be very soft, and slightly sticky.

Fill a pie plate of shallow dish with 1/2 cup of sugar for rolling if using.  With a tablespoon, scoop a heaping spoonful of dough and roll between palms into 1 1/2-inch ball; if the dough sticks to your hands, it helps to lightly moisten your palms with a little water, to prevent the dough from sticking.  Drop formed ball into sugar and toss to coat. Place on prepared baking sheet, spacing each ball about 2 inches apart. Repeat with remaining dough. Bake 1 sheet at a time, in the middle of the oven, until cookies are browned, still puffy, and edges have started to set but centers are still soft (cookies will look raw between cracks), about 11 minutes, rotating baking sheet front to back half way through. Do not overbake.

Cool cookies on baking sheet 5 minutes, then transfer to wire rack to cool.  Store in air-tight container or bag up to 5 days.

Adapted from Food and Wine

Fill a large bowl with ice water. In a small bowl, mix 2 tablespoons of the milk with the cornstarch. In another large bowl, whisk the cream cheese until smooth.

In a large saucepan, combine the remaining milk with the heavy cream, sugar, corn syrup and ginger. Bring the milk mixture to a boil and cook over moderate heat until the sugar dissolves and the ginger flavors the milk, about 4 minutes. Off the heat, gradually whisk in the cornstarch mixture. Return to a boil and cook over moderately high heat until the mixture is slightly thickened, about 1 minute.

Gradually whisk the hot milk base into the cream cheese until smooth. Whisk in the salt. Set the bowl in the ice water bath and let stand, stirring occasionally, until cold, about 20 minutes.  If you’re ice water bath is deep, which mine was, I found that placing a ramekin at the base of the water bath, and then placing the ice cream bowl on top of that, helped to stabilize the ice cream base as it cooled.

Strain base into a measuring cup with a pour spout or pitcher, and then pour ice cream base into maker and freeze according to your manufacturer’s instructions; The original recipe had you straining the ice cream base directly into the ice cream maker, but this would have been a challenge for my maker, because the opening is small – if it is easy for you to strain directly into your maker, go for it!  One less bowl to wash afterwards!

Remove ice cream from maker, and pack into an airtight container; cover with a double film of plastic wrap directly on top of ice cream.  For a more soft serve texture, ice cream can be eaten about 1 hour after it goes into the freezer.  If you would like it stiffer (to use in ice cream sandwiches!), let it sit for about 4 hours, until it’s more firm.

* If you are not a huge ginger fan, I would recommend dropping the ginger down to 1 1/2 tablespoons, for a  milder flavor.

Scoop 1/4 cup of ice cream onto one cookie, and top with another cookie.  The cookie to ice-cream ratio should be enough to make all 11 sandwiches (from the 22 cookies), if you choose; however not all of my cookies made it to sandwich stage.