You are here: Home / Breakfast & Brunch / Zucchini and Ricotta Galette 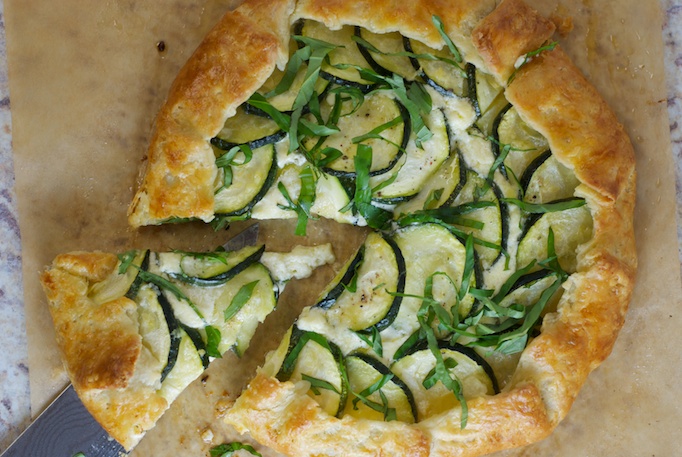 I love galettes; their rustic free form shape makes them so pretty and the crust to filling ratio is much closer to one another making the rich buttery crust more of a focus. 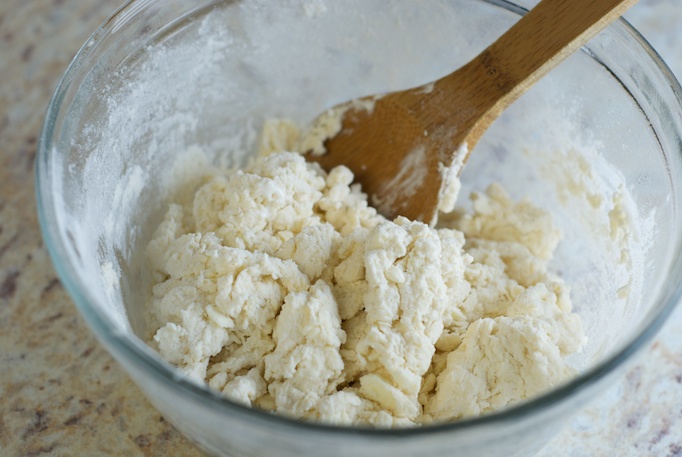 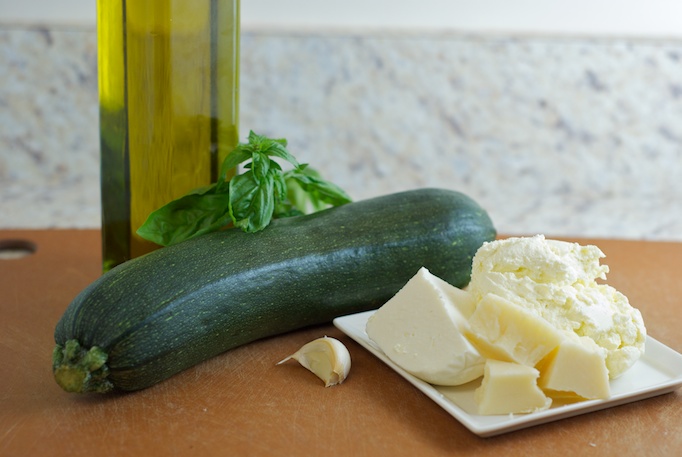 Salting the zucchini prior to baking the galette is very important, it helps to draw out a lot of moisture, that would otherwise leave you with a soggy galette.  I sliced my zucchini in round coins, but slicing on a very slight bias would look even prettier. 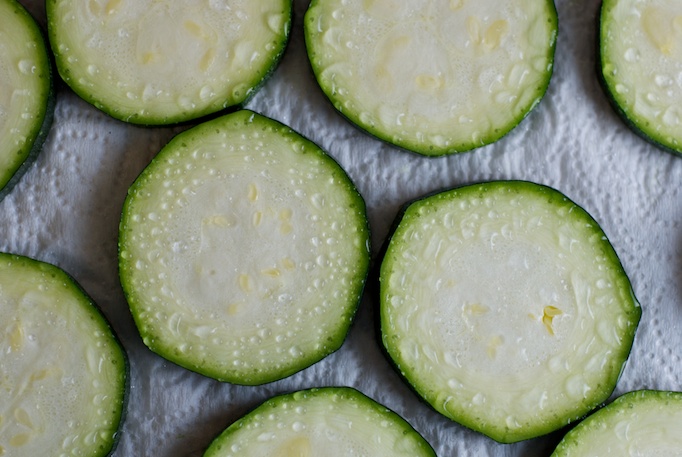 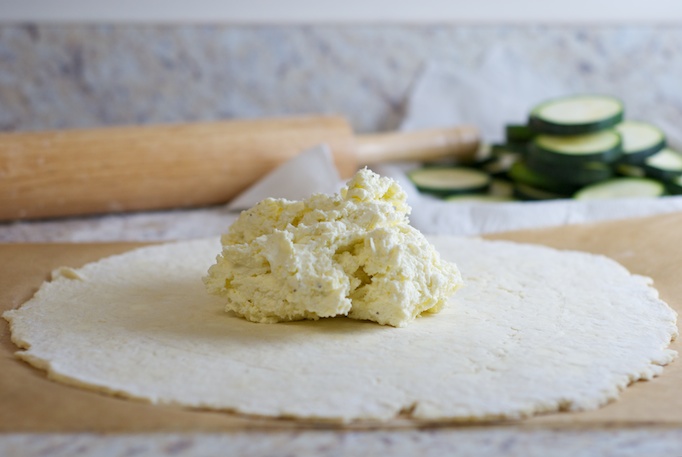 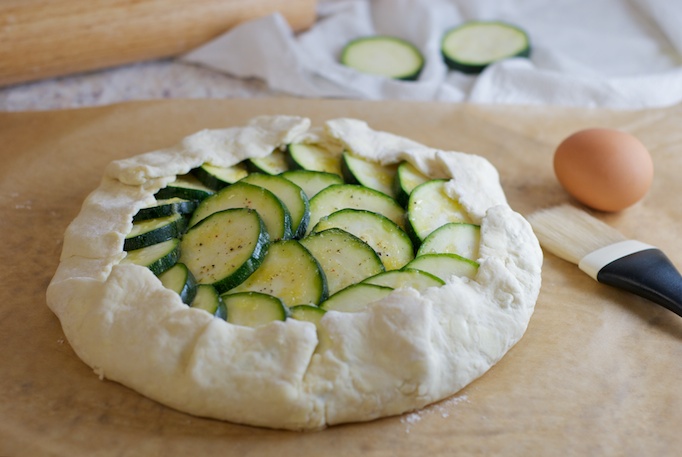 The egg glaze could be skipped if you wish, but it adds a really pretty gloss, and a nice golden brown crust. 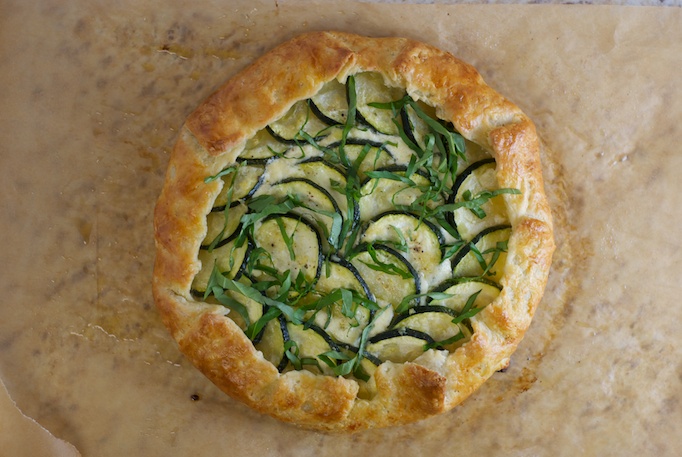 Pastry:
1 1/4 cups all-purpose flour, chilled in the freezer for 30 minutes
1/4 teaspoon salt
8 tablespoons (1 stick) cold unsalted butter, cut into pieces and chill again
1/4 cup sour cream
2 teaspoons fresh lemon juice
1/4 cup water, ice-cold
Filling:
1 large or 2 small zucchini, sliced into 1/4 inch thick rounds
1/2  teaspoon salt
1 tablespoon plus 1 teaspoon olive oil
1 medium garlic clove, minced (about 1 teaspoon)
3/4 cup ricotta cheese
1/2 cup (about 1 ounce) grated Parmesan or Pecorino Romano cheese
1/2 cup (2 ounces) shredded mozzarella
Basil leaves, sliced into fine slivers
Glaze:
1 egg yolk beaten with 1 teaspoon water
For the pastry crust, whisk flour and salt in a large bowl.  Add butter to flour and cut in using a pastry blender (or food processor), until the mixture resembles coarse meal, with the biggest pieces of butter the size of tiny peas; make a well in butter-flour mixture.  In a small bowl, whisk together the sour cream, lemon juice and water and add to the center of the butter-flour mixture. With your fingertips or a wooden spoon, mix in the liquid until large lumps form. Pat the lumps into a ball; do not overwork the dough.  Wrap dough ball in plastic wrap and refrigerate for 1 hour.  The dough will seem slightly dry and shaggy, but will even out while resting in the refrigerator.

For the filling, spread the zucchini out over several layers of paper towels.  Sprinkle with 1/2 teaspoon salt and let drain for 30 minutes; gently dry tops of the zucchini with paper towels before using.  In a small bowl, whisk the olive oil and the minced (or micro-planed) garlic together; set aside. In a separate bowl, mix the ricotta, Parmesan, mozzarella, and 1 teaspoon of the garlic olive oil together with salt and pepper to taste.

Pre-heat oven to 400 degrees. On a floured work surface, roll the dough out into a 12 to 13-inch round; transfer to parchment paper.  Spread the ricotta mixture evenly over the bottom of the galette dough, leaving a 2-inch border. Arrange the zucchini attractively on top of the ricotta in concentric circles, overlapping slightly, starting at the outside of the cheese filling and working inward. Drizzle the remaining tablespoon of the garlic and olive oil mixture evenly over the zucchini. Fold the border over the filling, folding the edges over themselves where needed to form a rustic circle. The center will be open; transfer galette to baking sheet (using an inverted baking sheet or pizza peel). Brush crust with egg yolk glaze.

Bake the galette until the cheese is puffed, the zucchini is wilted and the galette is golden brown, 30 to 40 minutes.  Remove from the oven, sprinkle with basil ribbons and let stand for 5 minutes, then slide the galette onto a serving plate. Cut into 6-8 wedges and serve hot, warm or at room temperature.  Refrigerate any left-overs.