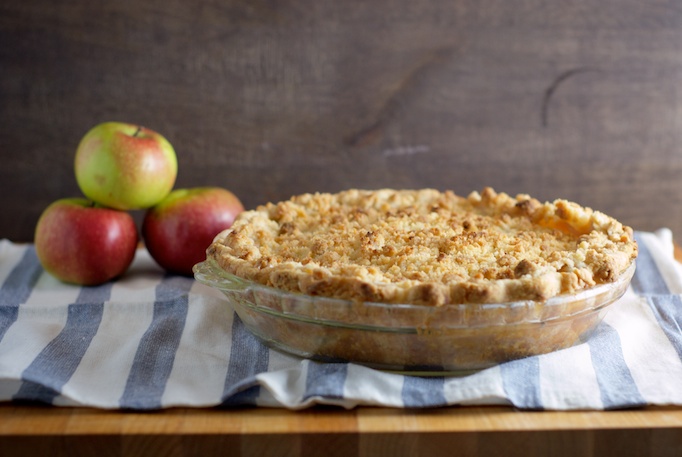 This is hands down Mike’s favorite pie. Before he would eat pumpkin pie, I would make him a mini apple crumb pie every Thanksgiving. Yes, yes, he’s way too spoiled, I know, but he’s well aware so I’m fine with that. I usually make it several times in the fall, and in the winter when local apples are still available at the farmers market. 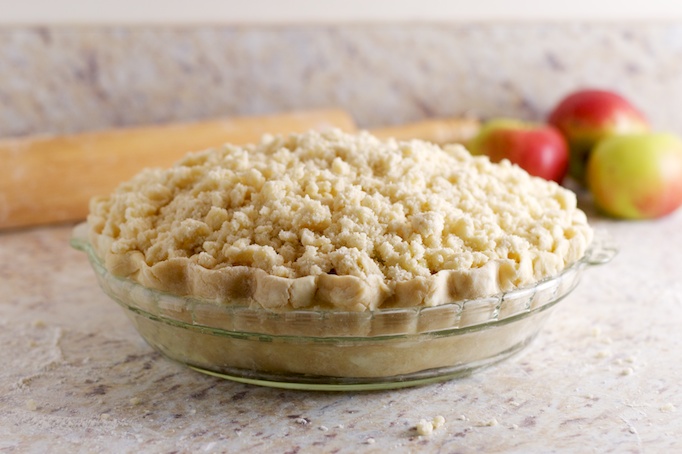 The crumb topping is from my Mom’s apple crisp recipe, but works wonderfully on this too. The pie is simply spiced with cinnamon, which is also how my mom makes her apple pie, but you can add in nutmeg or allspice to taste as well. 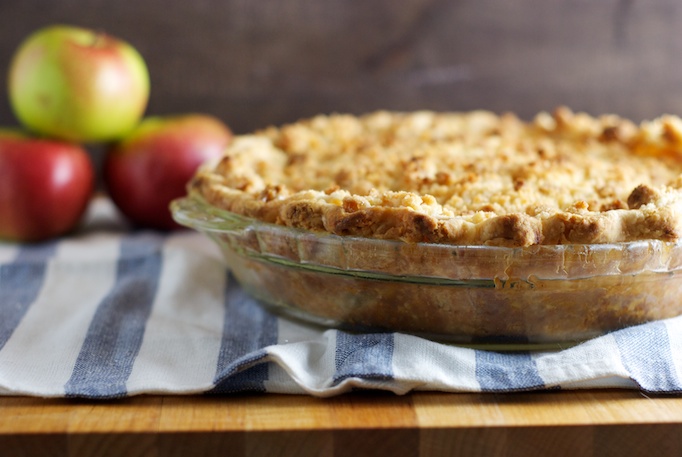 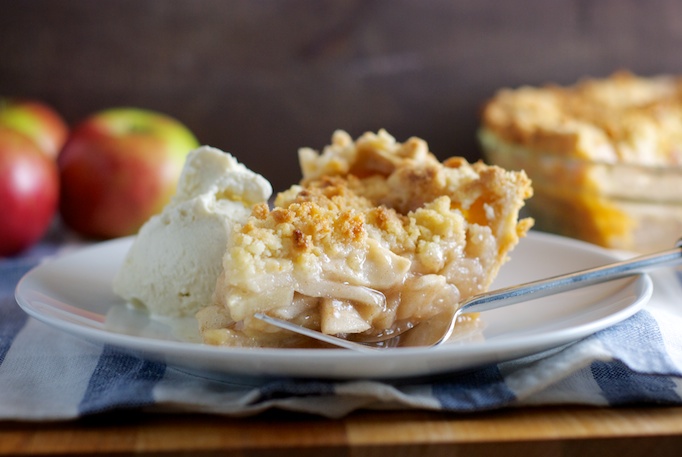 I prefer to mix apple varieties when making a crisp or pie. It creates different flavor and texture variations. I generally use a harder more firm apple that stands up to heat, combined with a softer apple that breaks down slightly. Granny Smith, Ida Reds, Cortland, Crispin are all good choices for firmer baking apples; McIntosh, Jonagold, Golden Delicious and Paula Reds all soften and loose more of their shape. I usually mix and match based on what is available, or whatever is leftover in the fridge.
Adjust the sugar in the apples to your preference or the tartness of the apples.
1 single pie crust (see below)
3 1/2 to 4 pounds of assorted apples
1/2 to 3/4 cup sugar
2 tablespoons flour
3/4 teaspoon cinnamon

Heat oven to 400 degrees-F, and place baking rack in the lower-middle of oven.

Roll the crust dough into a 12-13-inch round and fit into the 9 1/2-inch pie pan or dish. There should be about 1/2 inch of overhang in the dish; tuck the edges under and flute as desired, so the crust sticks out 1/4-inch above the dish. Refrigerate until ready for the apples.

In a large mixing bowl combine sugar, flour and cinnamon. Stir to combine. Peel, core and cut apples into slices about 1/4-inch thick, adding and tossing apples with the sugar mixture as you go. Toss apples one final time. Load apples into prepared crust in several additions, making sure each is even and leveled. Pour any juices remaining in bowl over apples. Set aside.

In a medium bowl, combine flour, sugar and butter with pastry cutter, fork or fingers until it resembles very coarse meal. Use hands to press and clump topping together to the size of large peas; scatter over apples covering all the way to the edge of the crust.

Bake for 50 to 60 minutes or until the juices start to get thick and bubbly. Check pie after 30 minutes of baking and cover edges with a foil pie shield if they are browning too quickly.

Adapted slightly from The New Best Recipe
This can be done in a food-processor, as recommended by CI, but I prefer to do it by hand, because I think it comes out just as good, and I feel like there is a whole lot less to clean afterwards.
1 1/4 cups unbleached all-purpose flour
1/2 teaspoon salt
1 tablespoon granulated sugar
6 tablespoons unsalted butter, chilled and cut into 1/4-inch pieces
1/4 cup vegetable shortening, chilled
3-4 tablespoons cold water